I wanted to get this lesson done as quickly after finishing the clinic as I could. I wanted to be able to be fresh with the ideas presented and still have the perspective from all the coaches I learned from clear in my mind. Keeping things clear is difficult when you are trying to describe swimming, as you demonstrate in positions they aren't swimming in, they do not translate as well once in the water. Having ideas people relate to may be helpful, but I think it is like testing someones armour, fire the directions at them over and over and one day it gets through.

I capped the class at 8 people, I rented 3 lanes, shallow and moderately cool pool at the beginning, absolutely frigid pool about 45 minutes in, just like Total Immersion Coaches clinic.

Covering superman, hmmmmm. Body awareness may be the lesson here. When you stand in front of someone and have them mirror what they see. They still don't realize that the minor differences between what you model and what they model, make all the difference, except they can't see the difference. So in lesson one, you pretty much have to keep repeating it and remodeling it to allow the person to pick up each small difference as they get closer to the goal. Superman is also a core move and can be described as such, for those who sink to the back with their heads down, I have started seeing a sway back. Their idea of relax is to relax the core, not the muscles, you need active streamlining, this requires the body to be held in superman posistion, the core exercise is a great way to impress this, but with no real gravity in the water, the backs scoop again.

Repeat, practice, repeat, practice. Lesson one we got the initial video, we covered superman and I had all of the people get involved in this. When you have 8 people they each have a partner. I decided to make them responsible for each others feedback. I had them watch the corrections and understand what to look for, I had them help each other, if they saw the person do it wrong, correct and verbally explain. I thought I would test this theory out. In the follow up I had one of the fellows say, he was overwhelmed being asked to look and help when he didn't know what he was supposed to do. But it helped him learn quicker what to look for and do. So my guess was right, mental training is as effective as physical training, as a teacher you must say what you see and then explain what they were supposed to do. If a student is doing this the drills sink in quicker as they have more responsibility to understanding them, than just pushing off in the moment.

We covered skate, I have to say that the people who come to Total Immersion probably learned from a book like myself, Terry's first book, the amazing yellow one. Skate was not there so much as the side balance at 90. The biggest challenge of skate is to have a person understand when enough is enough and any further is going to cause balance problems. Keeping the body in line during this is a good learning lesson, alot of people would over roll the shoulders and under roll the hips, once that was corrected you could see them relax. This was covered in lesson 2.

Lesson 3, we reviewed superman, skate. We added a little travel into it, a small amount of kick for propulsion and just stand up instead of trying to breath.

Lesson 4, we covered interrupted breathing, trying to trust your balance to keep your body in laser lead so that you could rotate to air and come back down to complete the drill. We added swing.

Lesson 5, we covered swing switch and how to elbow lead. This was a little trying as the people who hadn't perfected superman had heads up and bodies out of balance. We did a video update here to show people where we needed to focus.

Lesson 6, we started reviewing the drills adding some whole stroke, working on swing switch bringing it up slowly to whole stroke.

Lesson 7, we reviewed it all again and covered breathing. This was a request which I agreed with, everyone was getting their stroke fine, but hadn't addressed the breathing issues they brough with them. We all got to work at relaxing the head into the breathing and the heads came down.

Lesson 8, final lesson, quickly through the drills, then tempo trainer and some swim focus to try to get the strokes longer and the body in streamline, try to get timing into the stroke. Final video time.

Review of the lessons. I had suggestions that practice cards would be a great help to give at the end of each lesson and what to practice in between lessons. The paired concept was a hit. The video was where everyone seemed to place a lot of value. The class size was just right.....no bigger! Individual time with each person was still limited in a class this big. Demonstrations could be done at the beginning of the class while the students are still on deck. If the lesson is for breathing, demonstrate breathing in swim, explain what is going on in the breath and what issues people have.

After the mid point video it is important to give feedback, I used a voice over description of their swim. Not everyone watched it, so I think a written evaluation may have been helpful as well. I will include the individual finish video's of those people who agree. The changes made were really great, ingrained old habits are the hardest thing to break, so keeping up with drills and focused swimming is the best way to keep swimming after the lessons are complete. I think the format I used was successful and could use some polishing of course, but 8 lessons seems to be a long enough lesson to cover most of the bases.

You will keep trying to improve your swim for the rest of your life, this is help along the way. Tuning in to what your body is doing is the quickest way to changing the outcome.

Keep swimming, I will post videos of swimmers soon.
Posted by Triathlon Coach Gail at 6:20 AM 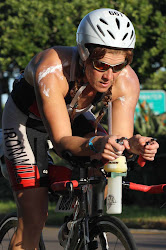